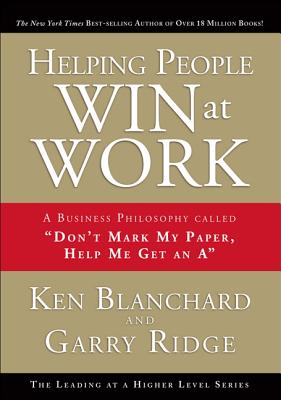 A Business Philosophy Called Don't Mark My Paper, Help Me Get an a (Achieving at a Higher Level)

Ken Blanchard's Leading at a Higher Level techniques are inspiring thousands of executives and entrepreneurs to lead their people to greatness, as they create high-performance organizations that make life better for everyone. Blanchard's immense audience has asked for one more thing: specific, in-depth examples of how leaders and their organizations are actually implementing these techniques: the challenges they've faced, the solutions they've developed, and the results they've achieved. Starting with this book, the new Leading at a Higher Level Series will give them precisely that. In Help Me Win at Work, WD-40 Company President/CEO Garry Ridge reveals how his company has used Blanchard's techniques to Partner for Performance with every employee, and achieve unprecedented levels of employee engagement and commitment. Ridge introduces WD-40's performance review system, explaining its goals, its features, and the cultural changes it required. Next, Ridge shares his leadership point of view: what he expects of people, what they can expect of him, and where his beliefs about leadership and motivation came from. Finally, in Part IV, Ken Blanchard explains why WD-40's Partnering for Performance program works so well and how it can work for you, too. This book isn't about cheerleading: it's about transforming performance review one step at a time and reaping record-breaking results.

Ken Blanchard has had an extraordinary impact on the day-to-day management of millions of people and companies. He is the author of several bestselling books, including the blockbuster international bestseller The One Minute Manager(R) and the giant business bestsellers Leadership and the One Minute Manager, Raving Fans, and Gung Ho! His books have combined sales of more than 18 million copies in more than twenty-five languages. In 2005 Ken was inducted into Amazon's Hall of Fame as one of the top twenty-five best-selling authors of all time. The College of Business at Grand Canyon University bears his name. Ken is the chief spiritual officer of The Ken Blanchard Companies, an international management training and consulting firm. He is also coauthor of Lead Like Jesus and cofounder of Lead Like Jesus, a nonprofit organization dedicated to inspiring and equipping people to lead like Jesus. Garry Ridge is president and chief executive officer of WD-40 Company, headquartered in San Diego, California. WD-40 Company is the maker of the ever-popular WD-40, as well as other household cleaning products. Garry has been with WD-40 since 1987 in various management positions, including executive vice president and chief operating officer and vice president of international. He has worked directly with WD-40 in 50 countries. A native of Australia, Garry has served as national vice president of the Australian Marketing Institute and the Australian Automotive Aftermarket Association. He received his M.S. degree in executive leadership from the University of San Diego in June 2001. Garry is an adjunct professor at the University of San Diego. He teaches leadership development, talent management, and succession planning in the Master of Science in Executive Leadership program. In March 2003 Garry was awarded Director of the Year for Enhancement of Economic Value by the Corporate Directors forum. In April 2004 he received the Arthur E. Hughes Career Achievement Award from the University of San Diego. In 2006 Garry was awarded the Ernst & Young Master Entrepreneur Award.
Loading...
or support indie stores by buying on