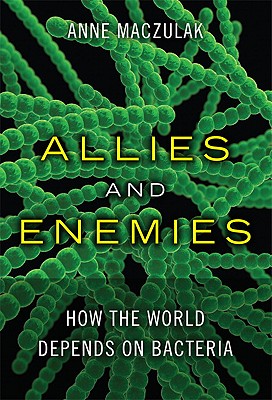 How the World Depends on Bacteria (FT Press Science)

Bacteria are invisible, mysterious, deadly, self-sufficient...and absolutely essential for all life, including yours. No other living things combine their elegant simplicity with their incredibly complex role: Bacteria keep us alive, supply our food, and regulate our biosphere. We can't live a day without them, and no chemical, antibiotic, or irradiation has ever successfully eradicated them. They're our partners, like it or not--even though some of them will happily kill us. Allies and Enemies tells the story of this amazing, intimate partnership. Authored by Anne Maczulak, a microbiologist who's hunted and worked with an extraordinary array of bacteria, this book offers a powerful new perspective on Earth's oldest creatures. You'll discover how bacteria work, how they evolve, their surprising contributions and uses, the roles they've played in human history, and why you can't survive without them. No form of life is more important, and in Maczulak's hands, none is more fascinating. Outlasted, outnumbered, outsmarted They've been here four billion years--and they even outnumber you in your own body How bacteria keep you alive... ...and how to keep them from killing you "Humans Defeat Germs " But not for long... The Invisible Universe The stunning hidden relationships between bacteria and the rest of nature

Anne Maczulak grew up in Watchung, New Jersey, with a plan to become either a writer or a biologist. She completed undergraduate and master's studies in animal nutrition at The Ohio State University, her doctorate nutrition and microbiology from the University of Kentucky, and conducted postdoctoral studies at the New York State Department of Health. She also holds an MBA from Golden Gate University in San Francisco. Anne began her training as a microbiologist studying the bacteria and protozoa of human and animal digestive tracts. She is one of a relatively small group of microbiologists who were trained in the Hungate method of culturing anaerobic microbes, meaning microbes that cannot live if exposed to oxygen. In industry, Anne worked in microbiology laboratories at Fortune 500 companies, developing anti-dandruff shampoos, deodorants, water purifiers, drain openers, septic tank cleaners, and disinfectants--all products that relate to the world of microbes. She conducted research in the University of California-San Francisco's dermatology group, testing wound-healing medications, antimicrobial soaps, and foot fungus treatments. In graduate school, other students and a few professors had seemed nonplussed when Anne filled her elective schedule with literature courses. Anne was equally surprised to learn that so many of her peers in science found pursuit of the arts to be folly. In 1992, with more than a decade of "growing bugs" on her resume, she packed up and drove from the east coast to California to begin a new career as a writer while keeping microbiology her day job. And yes, it was possible to be both a writer and a scientist. While toiling evenings on a mystery novel set in a microbiology lab, Anne continued working on various laboratory projects intended either to utilize good microbes or eliminate deadly ones. A decade later, Anne began her career as an independent consultant and has successfully blended writing with biology. Although the mystery novel never made it off the ground, Anne has since published ten books on microbes and environmental science. She focuses on making highly technical subjects easy to understand. From her unique perspective, Anne inspires her audiences into wanting to know more about microbes, and perhaps even like them.
Loading...
or
Not Currently Available for Direct Purchase