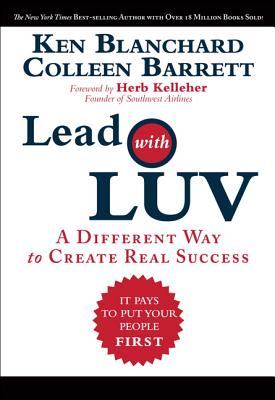 Once, there was a remarkable person who led with love. Her company succeeded where its competitors struggled. Its customers were loyal, its employees loved to work there, and it was profitable year after year, for decades. This loving leader began her career as an executive secretary, yet the company's founder chose her to succeed him as president. When asked why, he said, "Because she knows how to love people to success." She is Colleen Barrett, President Emeritus of Southwest Airlines. Lead with LUV is an extraordinary, wide-ranging conversation between Barrett and the legendary Ken Blanchard, author of The One Minute Manager. Drawing on personal experience, Barrett and Blanchard reveal why leading with love is the most powerful way to lead and how it can help you achieve truly amazing levels of performance. Discover:

Ken Blanchard has had an extraordinary impact on the day-to-day management of millions of people and companies. He is the coauthor of several bestselling books, including the blockbuster international bestseller The One Minute Manager and the giant business bestsellers Leadership and the One Minute Manager, Raving Fans, and Gung Ho! His books have combined sales of more than 18 million copies in more than twenty-five languages. In 2005, Ken was inducted into Amazon's Hall of Fame as one of the top twenty-five bestselling authors of all time. Ken is the chief spiritual officer of The Ken Blanchard Companies, an international management training and consulting firm. He is also cofounder of Lead Like Jesus Ministries, a nonprofit organization dedicated to inspiring and equipping people to be Servant Leaders in the marketplace. Colleen Barrett is currently President Emeritus of Southwest Airlines Co., a high-frequency, low-fare, point-to-point airline that prides itself on its excellent Customer Service qualities. Prior to stepping down as the Company's President on July 15, 2008, Colleen oversaw management, Leadership, and budget responsibilities for the following areas/ groups: Marketing, Corporate Communications, People (Human Resources), Customer Relations & Rapid Rewards, Labor & Employee Relations, Reservations, Corporate Security, Culture activities, and the Executive Office. She was also a member of the Company's Executive Planning Committee, and she chaired numerous special teams, task forces, and committees relating to internal and external Southwest Customers. Colleen served as a member of the Board of Directors from 2001 to May 2008 and as Corporate Secretary from March 1978 to May 2008. She was Vice President Administration from 1986 to 1990; Executive Vice President Customers from 1990 to 2001; and President from 2001 to July 2008. Before joining Southwest in 1978, Colleen worked for several years as Executive Assistant to Herb Kelleher (Southwest's former Executive Chairman) at his law firm. She serves on the Ken Blanchard College of Business Board of Trustees at Grand Canyon University, the Becker College Board of Trustees, and the JC Penney Co. Board of Directors. She is active in numerous civic and charitable organizations in Dallas, Texas.
or
Not Currently Available for Direct Purchase
Copyright © 2020 American Booksellers Association