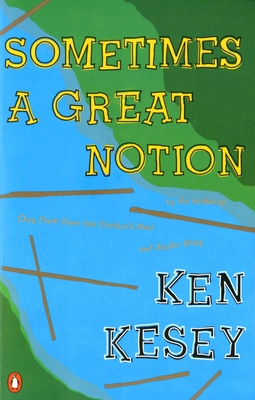 The magnificent second novel from the legendary author of One Flew Over the Cuckoo's Nest and Sailor Song is a wild-spirited and hugely powerful tale of an Oregon logging clan.

A bitter strike is raging in a small lumber town along the Oregon coast. Bucking that strike out of sheer cussedness are the Stampers: Henry, the fiercely vital and overpowering patriarch; Hank, the son who has spent his life trying to live up to his father; and Viv, who fell in love with Hank's exuberant machismo but now finds it wearing thin. And then there is Leland, Henry's bookish younger son, who returns to his family on a mission of vengeance - and finds himself fulfilling it in ways he never imagined. Out of the Stamper family's rivalries and betrayals, Ken Kesey crafted a novel with the mythic impact of Greek tragedy.

Ken Kesey was born in 1935 and grew up in Oregon. He graduated from the University of Oregon and later studied at Stanford with Wallace Stegner, Malcolm Cowley, Richard Scowcroft, and Frank O' Connor. One Flew Over the Cuckoo's Nest, his first novel, was published in 1962. His second novel, Sometimes a Great Notion, followed in 1964. His other books include Kesey's Garage Sale, Demon Box, Caverns (with O. U. Levon), The Further Inquiry, Sailor Song, and Last Go Round (with Ken Babbs). His two children's books are Little Tricker the Squirrel Meets Big Double the Bear and The Sea Lion. Ken Kesey died on November 10, 2001.
Loading...
or support indie stores by buying on