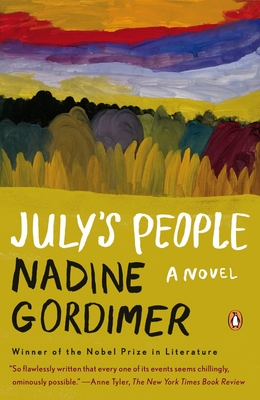 A startling, imaginative novel from the winner of the Nobel Prize in Literature

For years, it had been what is called a “deteriorating situation.” Now all over South Africa the cities are battlegrounds. The members of the Smales family—liberal whites—are rescued from the terror by their servant, July, who leads them to refuge in his village. What happens to the Smaleses and to July—the shifts in character and relationships—gives us an unforgettable look into the terrifying, tacit understandings and misunderstandings between blacks and whites.

“So flawlessly written that every one of its events seems chillingly, ominously possible.”—Anne Tyler, The New York Times Book Review

“So flawlessly written that every one of its events seems chillingly, ominously possible.”—Anne Tyler, The New York Times Book Review

“Gordimer knows this complex emotional and political territory all too well and writes about it superbly.”—Newsweek

“Gordimer’s art has achieved and sustained a rare beauty. Her prose has a density and sparsity that one finds in the greatest writers.”—The New Leader

Nadine Gordimer is the author of eleven previous novels, as well as collections of stories and essays. She has received many awards, including the Booker Prize (for The Conservationist in 1974) and the Nobel Prize in Literature in 1991. She lives in Johannesburg, South Africa.
Loading...
or support indie stores by buying on