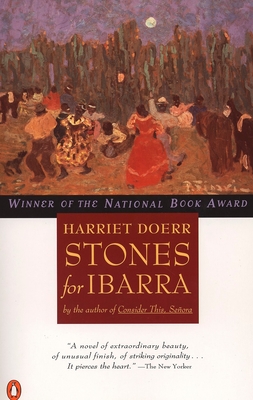 Winner of the National Book Award for First Work of Fiction

Richard and Sara Everton, just over and just under forty, have come to the small Mexican village of Ibarra to reopen a copper mine abandoned by Richard’s grandfather fifty years before. They have mortgaged, sold, borrowed, left friends and country, to settle in this remote spot; their plan is to live out their lives here, connected to the place and to each other.

The two Americans, the only foreigners in Ibarra, live among people who both respect and misunderstand them. And gradually the villagers--at first enigmas to the Evertons--come to teach them much about life and the relentless tide of fate.

Praise For Stones for Ibarra…

"A novel of genuine power and intelligence, written in an arresting style, amply imbued with atmosphere and meaning."--The Washington Post

"Doerr is a marvelous writer. Her observations are clear sighted, her writing spare but graceful, and she creates telling images. . . . A wonderful book."--Publishers Weekly

"Something of a miracle as novels go, a real act of creation."--Los Angeles Times

Harriet Doerr (1910-2002) was born in Pasadena, California, and attended Smith College in 1927, but received her B.A. from Stanford University in 1977, where she was accepted into the Creative Writing Program. She was a Stegner Fellow, received the Transatlantic Review Henfield Foundation Award and a grant from the National Endowment for the Arts. Doerr’s first novel, Stones for Ibarra, won the 1984 National Book Award for First Work of Fiction, the Bay Area Book Reviewers Award, the Godal Medal of the Commonwealth Club of California, and the American Academy of Arts and Letters Harold D. Vursell Award. Her second novel, Consider This, Señora, was a national bestseller. Doerr’s third and final book, The Tiger in the Grass, was a collection of stories and anecdotal pieces.
Loading...
or
Not Currently Available for Direct Purchase