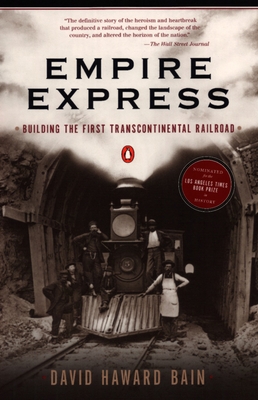 After the Civil War, the building of the transcontinental railroad was the nineteenth century's most transformative event. Beginning in 1842 with a visionary's dream to span the continent with twin bands of iron, Empire Express captures three dramatic decades in which the United States effectively doubled in size, fought three wars, and began to discover a new national identity. From self--made entrepreneurs such as the Union Pacific's Thomas Durant and era--defining figures such as President Lincoln to the thousands of laborers whose backbreaking work made the railroad possible, this extraordinary narrative summons an astonishing array of voices to give new dimension not only to this epic endeavor but also to the culture, political struggles, and social conflicts of an unforgettable period in American history.

David Haward Bain is the author of four previous works of nonfiction, including Empire Express and Sitting in Darkness, which received a Robert F. Kennedy Memorial Book Award. His articles and essays have appeared in Smithsonian, American Heritage, Kenyon Review, and Prairie Schooner, and he reviews regularly for The New York Times Book Review, The Washington Post, and Newsday. He is a teacher at Middlebury College and the Bread Loaf Writers’ Conference.
Loading...
or
Not Currently Available for Direct Purchase