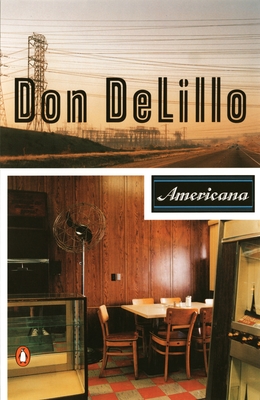 The first novel by Don DeLillo, author of White Noise (winner of the National Book Award) and The Silence

At twenty-eight, David Bell is the American Dream come true. He has fought his way to the top, surviving office purges and scandals to become a top television executive. David's world is made up of the images that flicker across America's screens, the fantasies that enthrall America's imagination.

When, at the height of his success, the dream (and the dream-making) become a nightmare, David sets out to rediscover reality. Camera in hand, he journeys across the country in a mad and moving attempt to capture and to impose a pattern on America's—and his own—past, present, and future.

"Nearly every sentence of Americana rings true, an insistence upon the authenticity behind the stereotypes . . . DeLillo is a man of frightening perception."
—Joyce Carol Oates, The Detroit Sunday News

"There have been many—too-many—novels in which the protagonist tries to find himself: here is one in which he tries to lose himself."
—The New York Times

Don DeLillo is the author of sixteen novels, including Zero K, Underworld, Falling Man, White Noise, and Libra. He has won the National Book Award, the PEN/Faulkner Award for Fiction, the Jerusalem Prize for his complete body of work, and the William Dean Howells Medal from the American Academy of Arts and Letters. In 2010, he was awarded the PEN/Saul Bellow Prize. The Angel Esmeralda was a finalist for the 2011 Story Prize and the PEN/Faulkner Award for Fiction. In 2012, DeLillo received the Carl Sandburg Literary Award for his body of work.
Loading...
or
Not Currently Available for Direct Purchase