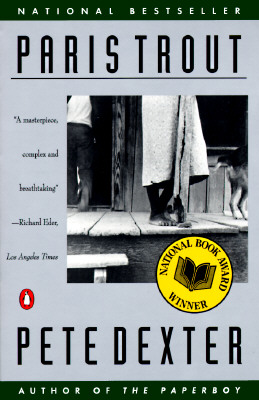 Pete Dexter's National Book Award winning tour de force tells the mesmerizing story of a shocking crime that shatters lives and exposes the hypocrisies of a small Southern town.
The time and place: Cotton Point, Georgia, just after World War II. The event: the murder of a fourteen-year-old black girl by a respected white citizen named Paris Trout, who feels he's done absolutely nothing wrong. As a trial looms, the crime eats away at the social fabric of Cotton Point, through its facade of manners and civility. Trout's indifference haunts his defense lawyer; his festering paranoia warps his timid, quiet wife; and Trout himself moves closer to madness as he becomes obsessed with his cause and his vendettas.
Praise for "Paris Trout"
""
A masterpiece, complex and breathtaking . . . Pete] Dexter portrays his characters with marvelous sharpness. "Los Angeles Times"
A psychological spellbinder that will take your breath away and probably interfere with your sleep. "The Washington Post Book World"
Dexter's brilliant understanding of the Deep South has allowed him to capture much of its essence its bitter class distinctions, its violence, its strangeness with a fidelity of detail and an ear for speech that I have rarely encountered since Flannery O Connor. William Styron
Dexter's powerfully emotional novel doesn t have any brakes. Hang on, because you won t be able to stop until the finish. "Chicago Tribune.

Pete Dexter is the author of the National Book Award winning novel "Paris Trout" as well as "Spooner, Paper Trails, God s Pocket, Deadwood, Brotherly Love, " and "Train." He has been a columnist for the "Philadelphia Daily News" and the "Sacramento Bee, " and has contributed to many magazines, including "Esquire, Sports Illustrated, " and "Playboy." His screenplays include "Rush" and "Mulholland Falls." Dexter was born in Michigan and raised in Georgia, Illinois, and eastern South Dakota. He lives on an island off the coast of Washington."
Loading...
or
Not Currently Available for Direct Purchase