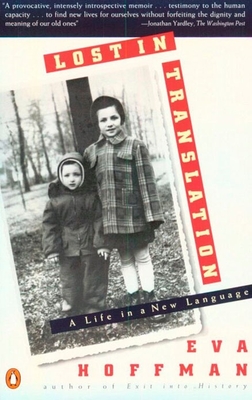 A Life in a New Language

“A marvelously thoughtful book . . . It is not just about emigrants and refugees. It is about us all.” –The New York Times

When her parents brought her from the war-ravaged, faded elegance of her native Cracow in 1959 to settle in well-manicured, suburban Vancouver, Eva Hoffman was thirteen years old. Entering into adolescence, she endured the painful pull of nostalgia and struggled to express herself in a strange unyielding new language.

Her spiritual and intellectual odyssey continued in college and led her ultimately to New York’s literary world yet still she felt caught between two languages, two cultures. But her perspective also made her a keen observer of an America in the flux of change.

A classically American chronicle of upward mobility and assimilation. Lost in Translation is also an incisive meditation on coming to terms with one’s own uniqueness, on learning how deeply culture affects the mind and body, and finally, on what it means to accomplish a translation of one’s self.

Praise For Lost in Translation: A Life in a New Language…

“Hoffman raises one provocative question after another about the relationship between language and culture . . . and about the emotional cost of re-creating oneself.” –Newsday

"A marvelously thoughtful book . . . It is not just about emigrants and refugees. It is about us all.” -The New York Times

Eva Hoffman was born in Krakow, Poland, and emigrated to America in her teens. She is the author of Lost in Translation, Exit Into History, Shtetl, The Secret, and After Such Knowledge. She is the recipient of a Guggenheim Fellowship, the Whiting Award, and an award from the American Academy and Institute of Arts and Letters. Hoffman lives in London.
Loading...
or
Not Currently Available for Direct Purchase