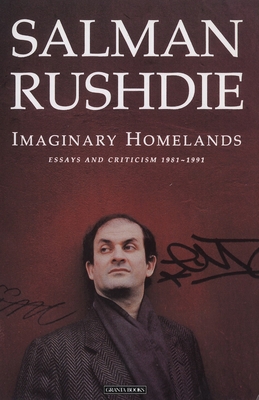 “Read every page of this book; better still, re-read them. The invocation means no hardship, since every true reader must surely be captivated by Rushdie’s masterful invention and ease, the flow of wit and insight and passion. How literature of the highest order can serve the interests of our common humanity is freshly illustrated here: a defence of his past, a promise for the future, and a surrender to nobody or nothing whatever except his own all-powerful imagination.”-Michael Foot, Observer

Salman Rushdie’s Imaginary Homelands is an important record of one writer’s intellectual and personal odyssey. The seventy essays collected here, written over the last ten years, cover an astonishing range of subjects –the literature of the received masters and of Rushdie’s contemporaries; the politics of colonialism and the ironies of culture; film, politicians, the Labour Party, religious fundamentalism in America, racial prejudice; and the preciousness of the imagination and of free expression. For this paperback edition, the author has written a new essay to mark the third anniversary of the fatwa.

Born in Bombay in 1947, Salman Rushdie is the author of six novels, including Grimus, Shame, The Satanic Verses, The Moor's Last Sigh, and The Ground Beneath Her Feet, and a volume of essays, Imaginary Homelands. His numerous literary prizes include the Booker Prize for Midnight's Children and the Whitbread Prize for The Satanic Verses.
Loading...
or support indie stores by buying on