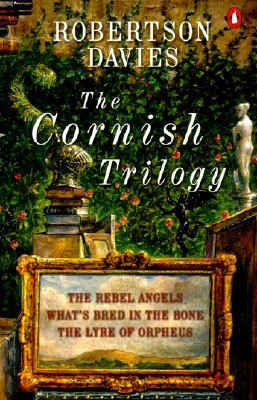 The Rebel Angels; What's Bred in the Bone; The Lyre of Orpheus

Woven around the pursuits of the energetic spirits and erudite scholars of the University of St. John and the Holy Ghost, this dazzling trilogy of novels lures the reader into a world of mysticism, historical allusion, and gothic fantasy that could only be the invention of Canada's grand man of letters.

Robertson Davies (1913–1995) was born and raised in Ontario, and was educated at a variety of schools, including Upper Canada College, Queen’s University, and Balliol College, Oxford. He had three successive careers: as an actor with the Old Vic Company in England; as publisher of the Peterborough Examiner; and as university professor and first Master of Massey College at the University of Toronto, from which he retired in 1981 with the title of Master Emeritus.

He was one of Canada’s most distinguished men of letters, with several volumes of plays and collections of essays, speeches, and belles lettres to his credit. As a novelist, he gained worldwide fame for his three trilogies: The Salterton Trilogy, The Deptford Trilogy, and The Cornish Trilogy, and for later novels Murther & Walking Spirits and The Cunning Man.

His career was marked by many honours: He was the first Canadian to be made an Honorary Member of the American Academy of Arts and Letters, he was a Companion of the Order of Canada, and he received honorary degrees from twenty-six American, Canadian, and British universities.