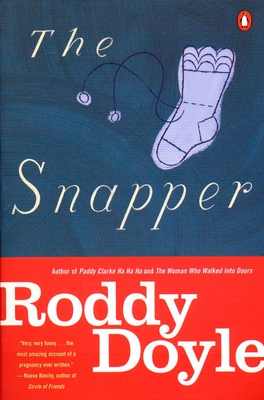 A Novel (The Barrytown Trilogy #2)

From the Booker Prize-winning author of Paddy Clarke Ha Ha Ha, the follow up to his acclaimed debut novel The Commitments

Twenty-year-old Sharon Rabbitte is pregnant. She's also unmarried, living at home, working in a grocery store, and keeping the father's identity a secret. Her own father, Jimmy Sr., is shocked by the news. Her mother says very little. Her friends and neighbors all want to know whose "snapper" Sharon is carrying.

In his sparkling second novel, Roddy Doyle observes the progression of Sharon's pregnancy and its impact on the Rabbitte family—especially on Jimmy Sr.—with wit, candor, and surprising authenticity.


Praise For The Snapper: A Novel (The Barrytown Trilogy #2)…

"Jimmy Sr [is] a wonderful mixture of obscene bluster and boozy sentimentality. . . . He's intensely real, and the novel comes vividly alive as he begins to understand that he can't control the feisty Sharon."
--The New York Times Book Review

“Very, very funny . . . The most amazing account of a pregnancy ever written.”
--Maeve Binchy

Roddy Doyle is an internationally bestselling writer. His first three novels—The Commitments, The Snapper, and the 1991 Booker Prize finalist The Van—are known as The Barrytown Trilogy. He is also the author of the novels Paddy Clarke Ha Ha Ha (1993 Booker Prize winner), The Woman Who Walked into Doors, and A Star Called Henry, and a non-fiction book about his parents, Rory & Ita. Doyle has also written for the stage and the screen: the plays Brownbread, War, Guess Who's Coming for the Dinner, and The Woman Who Walked Into Doors; the film adaptations of The Commitments )as co-writer), The Snapper, and The Van; When Brendan Met Trudy (an original screenplay); the four-part television series Family for the BBC; and the television play Hell for Leather. Roddy Doyle has also written the children's books The Giggler Treatment, Rover Saves Christmas, and The Meanwhile Adventures and contributed to a variety of publications including The New Yorker magazine and several anthologies. He lives in Dublin.
Loading...
or
Not Currently Available for Direct Purchase