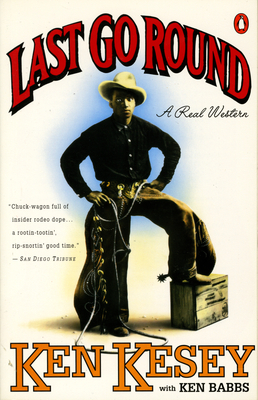 It was around a sagebrush campfire in eastern Oregon that Kesey first heard the tale from his father - about the legendary "last go round" that took place at the original Pendleton Round Up in 1911.

Hundreds of riders were competing for the first World Championship Broncbusting title, but it was one special trio of buckeroos that provided the drama: a popular black cowboy, George Fletcher; a Nez Perce Indian cowboy, Jackson Sundown; and a fresh-faced kid from Tennessee name of Johnathan E. Lee Spain. Who would walk away with the prize money and the silver-studded saddle? When the dust cleared, everyone knew they'd witnessed something extraordinary.

Kesey has journeyed back into Oregon history to reclaim this long-remembered moment, beefed up the bare bones of fact, and whipped them into a full-blown rip-snorting Tale of the True West. Sixteen pages of rare Round Up photographs provide graphic testimony of the time. The tiny town of Pendleton is swollen to bursting that memorable weekend and bristling with colorful characters like Buffalo Bill Cody, wrestler Frank "The Cruel Crusher" Gotch, cowgirl Prairie Rose Henderson, and a formidable medicine man named Parson Montanic. From the teepees along the river to the teeming saloons on Main Street, Round Up fever blazes like a prairie fire. This story of love, sweat, and horseflesh is a unique Western, wild and wooly and full of fleas. Let 'er buck!

Ken Kesey was born in 1935 and grew up in Oregon. He graduated from the University of Oregon and later studied at Stanford with Wallace Stegner, Malcolm Cowley, Richard Scowcroft, and Frank O' Connor. One Flew Over the Cuckoo's Nest, his first novel, was published in 1962. His second novel, Sometimes a Great Notion, followed in 1964. His other books include Kesey's Garage Sale, Demon Box, Caverns (with O. U. Levon), The Further Inquiry, Sailor Song, and Last Go Round (with Ken Babbs). His two children's books are Little Tricker the Squirrel Meets Big Double the Bear and The Sea Lion. Ken Kesey died on November 10, 2001.
or support indie stores by buying on
(This book is on backorder)
Copyright © 2020 American Booksellers Association