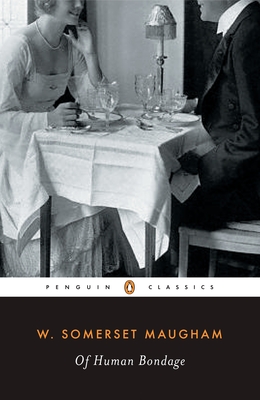 "It is very difficult for a writer of my generation, if he is honest, to pretend indifference to the work of Somerset Maugham," wrote Gore Vidal. "He was always so entirely there."

Originally published in 1915, Of Human Bondage is a potent expression of the power of sexual obsession and of modern man's yearning for freedom. This classic bildungsroman tells the story of Philip Carey, a sensitive boy born with a clubfoot who is orphaned and raised by a religious aunt and uncle. Philip yearns for adventure, and at eighteen leaves home, eventually pursuing a career as an artist in Paris. When he returns to London to study medicine, he meets the androgynous but alluring Mildred and begins a doomed love affair that will change the course of his life. There is no more powerful story of sexual infatuation, of human longing for connection and freedom.

"Here is a novel of the utmost importance," wrote Theodore Dreiser on publication. "It is a beacon of light by which the wanderer may be guided. . . . One feels as though one were sitting before a splendid Shiraz of priceless texture and intricate weave, admiring, feeling, responding sensually to its colors and tones."

Praise For Of Human Bondage…

“[Of Human Bondage] was an entirely new departure. Maugham, who usually cultivates a fastidious detachment, shows in this work a personal commitment that was unusual, sweeping the reader up in his own passionate intensity. Compelling and uncompromising, written with an unflagging energy and drive, the work could hardly be more different from any he had previously published . . . The story closely follow[s] the events of Maugham’s early life, with at its centre the terrifying experience of a masochistic sexual obsession.” —from the Introduction by Selina Hastings