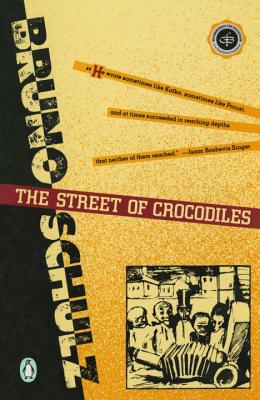 The Street of Crocodiles

A novel that blends the real and the fantastic, from "one of the most original imaginations in modern Europe" (Cynthia Ozick)

The Street of Crocodiles in the Polish city of Drogobych is a street of memories and dreams where recollections of Bruno Schulz's uncommon boyhood and of the eerie side of his merchant family's life are evoked in a startling blend of the real and the fantastic. Most memorable - and most chilling - is the portrait of the author's father, a maddened shopkeeper who imports rare birds' eggs to hatch in his attic, who believes tailors' dummies should be treated like people, and whose obsessive fear of cockroaches causes him to resemble one. Bruno Schulz, a Polish Jew killed by the Nazis in 1942, is considered by many to have been the leading Polish writer between the two world wars. For more than seventy years, Penguin has been the leading publisher of classic literature in the English-speaking world. With more than 1,700 titles, Penguin Classics represents a global bookshelf of the best works throughout history and across genres and disciplines. Readers trust the series to provide authoritative texts enhanced by introductions and notes by distinguished scholars and contemporary authors, as well as up-to-date translations by award-winning translators.

Bruno Schulz, a Polish Jew killed by the Nazis in 1942, is considered by many to have been the leading Polish writer between the two world wars.
Loading...
or
Not Currently Available for Direct Purchase