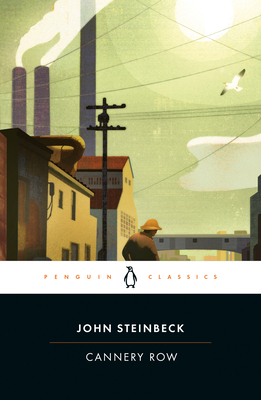 Steinbeck’s tough yet charming portrait of people on the margins of society, dependant on one another for both physical and emotional survival

Published in 1945, Cannery Row focuses on the acceptance of life as it is: both the exuberance of community and the loneliness of the individual. Drawing on his memories of the real inhabitants of Monterey, California, including longtime friend Ed Ricketts, Steinbeck interweaves the stories of Doc, Dora, Mack and his boys, Lee Chong, and the other characters in this world where only the fittest survive, to create a novel that is at once one of his most humorous and poignant works. In her introduction, Susan Shillinglaw shows how the novel expresses, both in style and theme, much that is essentially Steinbeck: “Scientific detachment, empathy toward the lonely and depressed . . . and, at the darkest level . . . the terror of isolation and nothingness.”

“John Steinbeck knew and understood America and Americans better than any other writer of the twentieth century.” —The Dallas Morning News

“A man whose work was equal to the vast social themes that drove him.” —Don DeLillo

John Steinbeck (1902–1968) born in Salinas, California, grew up in a fertile agricultural valley, about twenty-five miles from the Pacific Coast. Both the valley and the coast would serve as settings for some of his best fiction. In 1919 he went to Stanford University, where he intermittently enrolled in literature and writing courses until he left in 1925 without taking a degree. During the next five years he supported himself as a laborer and journalist in New York City, all the time working on his first novel, Cup of Gold (1929).

Early in the 1940s, Steinbeck became a filmmaker with The Forgotten Village (1941) and a serious student of marine biology with Sea of Cortez (1941). He devoted his services to the war, writing Bombs Away (1942) and the controversial play-novelette The Moon is Down (1942).Cannery Row (1945), The Wayward Bus (1948), another experimental drama, Burning Bright (1950), and The Log from the Sea of Cortez (1951) preceded publication of the monumental East of Eden (1952), an ambitious saga of the Salinas Valley and his own family’s history.

Susan Shillinglaw (introducer) is a professor of English San Jose State University. She is the author of On Reading the Grapes of Wrath and Carol and John Steinbeck: Portrait of a Marriage.