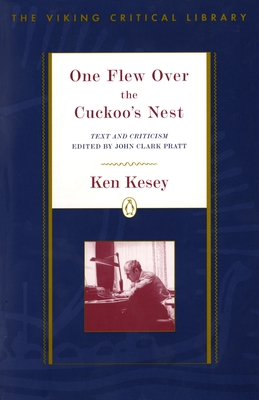 "Powerful, poetic realism...makes the tired old subject of life in a mental hospital into an absorbing Orwellian microcosm of all humanity."—Life.

An international bestseller and the basis for a hugely successful film, Ken Kesey's One Flew Over the Cuckoo's Nest was one of the defining works of the 1960s. This Viking Critical Library edition is accompanied by essays, discussion topics, a chronology, and a bibliography.

A mordant, wickedly subversive parable set in a mental ward, the novel chronicles the head-on collision between its hell-raising, life-affirming hero Randle Patrick McMurphy and the totalitarian rule of Big Nurse. McMurphy swaggers into the mental ward like a blast of fresh air and turns the place upside down, starting a gambling operation, smuggling in wine and women, and egging on the other patients to join him in open rebellion. But McMurphy's revolution against Big Nurse and everything she stands for quickly turns from sport to a fierce power struggle with shattering results.


Praise For One Flew Over the Cuckoo's Nest: Revised Edition (Critical Library, Viking)…

Ken Kesey was born in 1935 and grew up in Oregon. He graduated from the University of Oregon and later studied at Stanford with Wallace Stegner, Malcolm Cowley, Richard Scowcroft, and Frank O' Connor. One Flew Over the Cuckoo's Nest, his first novel, was published in 1962. His second novel, Sometimes a Great Notion, followed in 1964. His other books include Kesey's Garage Sale, Demon Box, Caverns (with O. U. Levon), The Further Inquiry, Sailor Song, and Last Go Round (with Ken Babbs). His two children's books are Little Tricker the Squirrel Meets Big Double the Bear and The Sea Lion. Ken Kesey died on November 10, 2001.
Loading...
or
Not Currently Available for Direct Purchase