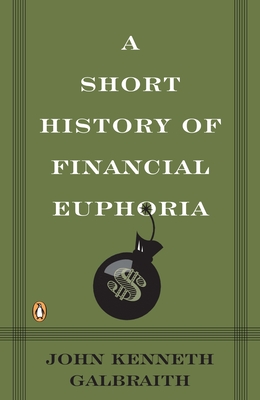 A Short History of Financial Euphoria

The world-renowned economist offers "dourly irreverent analyses of financial debacle from the tulip craze of the seventeenth century to the recent plague of junk bonds." —The Atlantic.

With incomparable wisdom, skill, and wit, world-renowned economist John Kenneth Galbraith traces the history of the major speculative episodes in our economy over the last three centuries. Exposing the ways in which normally sane people display reckless behavior in pursuit of profit, Galbraith asserts that our "notoriously short" financial memory is what creates the conditions for market collapse. By recognizing these signs and understanding what causes them we can guard against future recessions and have a better hold on our country's (and our own) financial destiny.

Praise For A Short History of Financial Euphoria…

John Kenneth Galbraith was born in 1908 in Ontario, Canada. He earned a PhD at the University of California in 1934 and later took a fellowship at Cambridge, where he first encountered Keynesian economics. At different points in his life he taught at both Harvard and Princeton, and wrote more than forty books on an array of economic topics. During World War II he served as deputy head of the Office of Price Administration, charged with preventing inflation from crippling the war efforts, and also served as the US Ambassador to India during the Kennedy administration. He passed away in 2006.
Loading...
or support indie stores by buying on