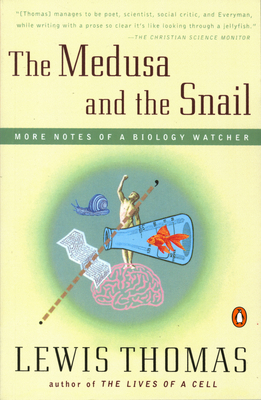 The Medusa and the Snail

The medusa is a tiny jellyfish that lives on the ventral surface of a sea slug found in the Bay of Naples. Readers will find themselves caught up in the fate of the medusa and the snail as a metaphor for eternal issues of life and death as Lewis Thomas further extends the exploration of man and his world begun in The Lives of a Cell. Among the treasures in this magnificent book are essays on the human genius for making mistakes, on disease and natural death, on cloning, on warts, and on Montaigne, as well as an assessment of medical science and health care. In these essays and others, Thomas once again conveys his observations of the scientific world in prose marked by wonder and wit.

Lewis Thomas was a physician, poet, etymologist, essayist, administrator, educator, policy advisor, and researcher. A graduate of Princeton University and Harvard Medical School, he was the dean of Yale Medical School and New York University School of Medicine, and the president of Memorial Sloan-Kettering Institute. He wrote regularly in the New England Journal of Medicine, and his essays were published in several collections, including The Lives of a Cell: Notes of a Biology Watcher, which won two National Book Awards and a Christopher Award, and The Medusa and the Snail, which won the National Book Award in Science. He died in 1993.
Loading...
or support indie stores by buying on