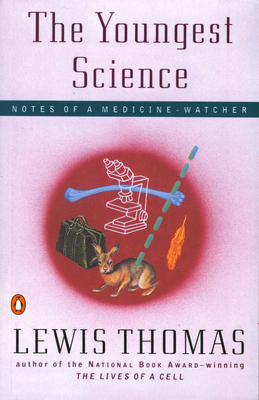 From the 1920s when he watched his father, a general practitioner who made housecalls and wrote his prescriptions in Latin, to his days in medical school and beyond, Lewis Thomas saw medicine evolve from an art into a sophisticated science. The Youngest Science is Dr. Thomas's account of his life in the medical profession and an inquiry into what medicine is all about--the youngest science, but one rich in possibility and promise.

He chronicles his training in Boston and New York, his war career in the South Pacific, his most impassioned research projects, his work as an administrator in hospitals and medical schools, and even his experiences as a patient. Along the way, Thomas explores the complex relationships between research and practice, between words and meanings, between human error and human accomplishment, More than a magnificent autobiography, The Youngest Science is also a celebration and a warning--about the nature of medicine and about the future life of our planet.

Lewis Thomas was a physician, poet, etymologist, essayist, administrator, educator, policy advisor, and researcher. A graduate of Princeton University and Harvard Medical School, he was the dean of Yale Medical School and New York University School of Medicine, and the president of Memorial Sloan-Kettering Institute. He wrote regularly in the New England Journal of Medicine, and his essays were published in several collections, including The Lives of a Cell: Notes of a Biology Watcher, which won two National Book Awards and a Christopher Award, and The Medusa and the Snail, which won the National Book Award in Science. He died in 1993.
Loading...
or
Not Currently Available for Direct Purchase