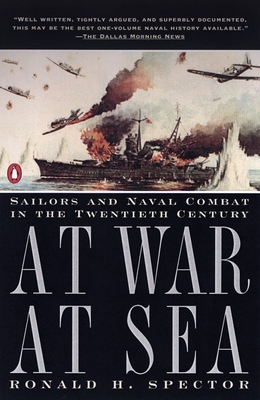 At War at Sea (Paperback)

Sailors and Naval Combat in the Twentieth Century

Beginning with a gripping account of one of the most decisive naval battles in history-the 1905 battle of Tsushima between the Japanese and Russians-and ending with the sophisticated missile engagements of the Falklands and in the Persian Gulf, naval historian Ronald Spector explores every facet of the past one hundred years of naval warfare. Drawing from more than one hundred diaries, memoirs, letters, and interviews, this is, above all, a masterful narrative of the human side of combat at sea-real stories told from the point of view of the sailors who experienced it. Exhaustively researched and fascinating in detail, At War at Sea is a monumental history of the men, the ships, and the battles fought on the high seas.

"Monumental . . . Many books have recorded the history of the United States Navy, but few have meshed that history with that of all other major navies-an unusual comparative technique that brings into often startling relief the virtues and flaws of our own navy." (The Washington Post)"

Ronald H. Spector served as a marine in Vietnam. He is the author of numerous books, including Eagle Against the Sun: The American War Against Japan, which won the Theodore and Franklin Roosevelt Prize in Naval History. He is currently a professor of history and international relations at George Washington University.
or
Not Currently Available for Direct Purchase
Copyright © 2020 American Booksellers Association