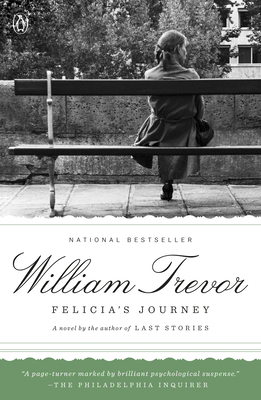 Felicia is unmarried, pregnant, and penniless. She steals away from a small Irish town and drifts through the industrial English Midlands, searching for the boyfriend who left her. Instead she meets up with the fat, fiftyish, unfailingly reasonable Mr. Hilditch, who is looking for a new friend to join the five other girls in his Memory Lane. But the strange, sad, terrifying tricks of chance unravel both his and Felicia's delusions in a story that will magnetize fans of Alfred Hitchcock and Ruth Rendell even as it resonates with William Trevor's own "impeccable strength and piercing profundity" (The Washington Post Book World).

Praise For Felicia's Journey: A Novel…

"A page-turner marked by brilliant psychological suspense."
—The Philadelphia Inquirer

"A battle for the soul, waged between the forces of good and evil . . . Mr. Trevor shows just how wise and wry and funny and morally astute an observer of the human comedy he is."
—Patrick McGrath, The New York Times Book Review

"A thriller lifted to the level of high art . . ."
—Publishers Weekly

"In thirteen novels and eight short-story collections [William Trevor] has shown himself a close observer, a fine stylist, a master psychologist. In Felicia's Journey . . . he brings all these qualities into play, and adds to them a teasing manipulation of the reader's sensibilities, so that the book has the elegant tensions of a high-class thriller."
—The New York Review of Books

"One of the very best writers of our era."
—The Washington Post Book World

William Trevor was born in Mitchelstown, County Cork, and spent his childhood in provincial Ireland. He studied at Trinity College, Dublin. He is the author of twenty-nine books, including Felicia’s Journey, which won the Whitbread Book of the Year Award and was made into a motion picture, and The Story of Lucy Gault, which was shortlisted for both the Man Booker Prize and the Whitbread Fiction Prize. In 1996 he was the recipient of the Lannan Award for Fiction. In 2001, he won the Irish Times Literature Prize for fiction. Two of his books were chosen by The New York Times as best books of the year, and his short stories appeared regularly in the New Yorker. In 1997, he was named Honorary Commander of the British Empire.
Loading...
or
Not Currently Available for Direct Purchase