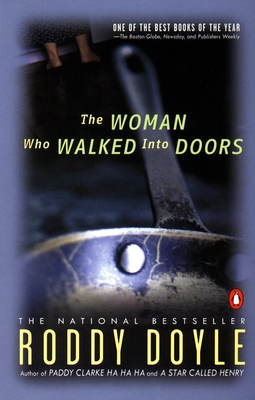 The Woman Who Walked into Doors (Paperback)

A Novel (A Paula Spencer Novel #1)

From the Booker Prize-winning author of Paddy Clarke Ha Ha Ha, the heartrending story of a brave and tenacious housewife

Paula Spencer is a thirty-nine-year-old working-class woman struggling to reclaim her dignity after marriage to an abusive husband and a worsening drinking problem. Paula recalls her contented childhood, the audacity she learned as a teenager, the exhilaration of her romance with Charlo, and the marriage to him that left her feeling powerless. Capturing both her vulnerability and her strength, Roddy Doyle gives Paula a voice that is real and unforgettable.

Roddy Doyle is an internationally bestselling writer. His first three novels—The Commitments, The Snapper, and the 1991 Booker Prize finalist The Van—are known as The Barrytown Trilogy. He is also the author of the novels Paddy Clarke Ha Ha Ha (1993 Booker Prize winner), The Woman Who Walked into Doors, and A Star Called Henry, and a non-fiction book about his parents, Rory & Ita. Doyle has also written for the stage and the screen: the plays Brownbread, War, Guess Who's Coming for the Dinner, and The Woman Who Walked Into Doors; the film adaptations of The Commitments )as co-writer), The Snapper, and The Van; When Brendan Met Trudy (an original screenplay); the four-part television series Family for the BBC; and the television play Hell for Leather. Roddy Doyle has also written the children's books The Giggler Treatment, Rover Saves Christmas, and The Meanwhile Adventures and contributed to a variety of publications including The New Yorker magazine and several anthologies. He lives in Dublin.
or
Buy Here
Copyright © 2020 American Booksellers Association