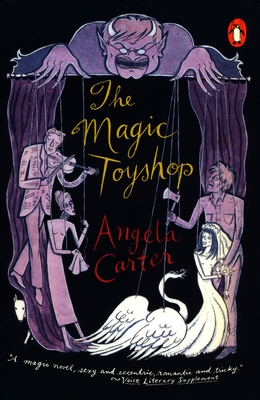 From the master of the literary supernatural and author of The Bloody Chamber, a startling tale of the redemptive power of physical and emotional love

One night Melanie walks through the garden in her mother's wedding dress. The next morning her world is shattered. Forced to leave the comfortable home of her childhood, she is sent to London to live with relatives she has never met: Aunt Margaret, beautiful and speechless, and her brothers, Francie, whose graceful music belies his clumsy nature, and the volatile Finn, who kisses Melanie in the ruins of the pleasure gardens. And brooding Uncle Philip loves only the life-sized wooden puppets he creates in his toyshop. This classic gothic novel established Angela Carter as one of our most imaginative writers and augurs the themes of her later creative work.

Praise For The Magic Toyshop…

"Beneath its contemporary surface, this novel shimmers with blurred echoes—from Lewis Carroll, from 'Giselle' and 'Coppelia,' Harlequin and Punch . . . It leaves behind it a flavor, pungent and unsettling." —The New York Times Book Review

“Carter produced . . . fiction that was lavishly fabulist and infinitely playful, with a crown jeweler’s style, precise but fully colored. . . . Her books are . . . revered by fans of speculative fiction stateside and have influenced writers as diverse as Rick Moody, Sarah Waters, Neil Gaiman, Jeff VanderMeer, Jeanette Winterson and Kelly Link. Salman Rushdie, who became her friend, described her as ‘the first great writer I ever met.’ Yet her legacy has been a slow and stealthy one, invisible to many of the readers who have benefited from it. . . . Most contemporary literary fiction with a touch of magic, from Karen Russell’s to Helen Oyeyemi’s, owes something to Angela Carter’s trail-blazing. . . . If our personal and literary spaces feel more wide open now, she’s one of the ones we have to thank.” —Laura Miller, Salon

“She writes a prose that lends itself to magnificent set pieces of fastidious sensuality . . . dreams, myths, fairy tales, metamorphoses, the unruly unconscious, epic journeys, and a highly sensual celebration of sexuality in both its most joyous and darkest manifestations.” —Ian McEwan

Angela Carter (1940–1992) wrote nine novels and numerous short stories, as well as nonfiction, radio plays, and the screenplay for Neil Jordan's 1984 movie The Company of Wolves, based on her story of the same name. She won numerous literary awards, traveled and taught widely in the United States, and lived in London.
Loading...
or support indie stores by buying on