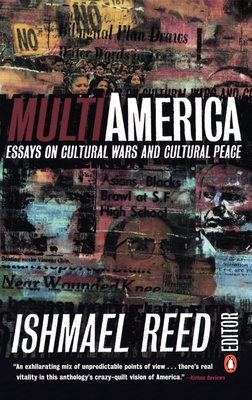 “An exhilarating mix of unpredictable points of view . . . there’s real vitality in this anthology’s crazy-quilt vision of America.”—Kirkus Reviews

Is there such a thing as “American” culture? No, says Ishmael Reed, the editor of this refreshing anthology and a longtime critic of the mainstream media which, he insists, marginalizes non-Anglo, non-Yankee cultures. In this impressive collection of dissenting voices, Reed and other African-Americans, Native Americans, Asian-Americans, Italian-Americans, and Irish-Americans speak out against monoculturalism and provide perspectives from points of view frequently omitted from the discussion of race in the United States.

Addressing a broad variety of issues—including assimilation; racial conflicts between minorities and within the gay rights movement; victimization; and stereotyping—these essays by notable writers, teachers, students, and professionals take us far beyond the issues of black vs. white and often veer toward the controversial. Stimulating, unpredictable, and provocative, Multi-America introduces the authentic voices of Rainbow America in all their diverse, angry, proud, celebratory glory.