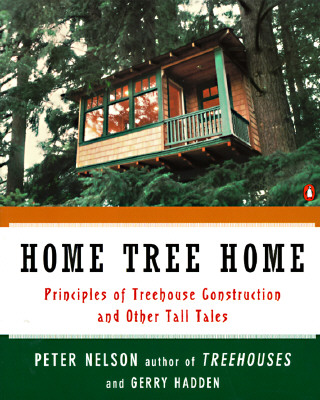 Principles of Treehouse Construction and Other Tall Tales

Remember the view from atop a tree? You could survey the landscape like a monarch, escape your parents' watchful eye, and let your imagination run wild. Well, just because you've grown up, it doesn't mean you can't enjoy the sense of liberation a tree provides. Here is the most comprehensive guide ever to building your own castle in the air, be it a simple child's playhouse or an adult's cozy retreat with all the modern conveniences, including electricty. Peter Nelson, the nation's foremost authority on treehouses, tells you everything you need to know about designing and building the house that's right for you and your family. He gives you information on site selection (why some trees provide better homes than others), safety issues, tree care, advice on styles and materials, and other essential rules of thumb that will save time and money.

Nelson walks you through the construction of four actual projects: a children's playhouse, a vacation home, an office, and a full-time residence. Whether you'd like to build your children a safe and fun place to play and dream, or you're contemplating your own retreat from the drudgeries of earthbound living, this practical, wildly fanciful guide will show you how to make your tree fantasies come true.

Peter N. Nelson became excited about treehouses at age five when his dad built him a tiny one behind the garage of their Ridgewood, New Jersey, home. The scope and size of Nelson’s treehouse fantasies expanded from there, but all of that appeared to run its course by the time he received his driver’s license. Unfashionably, his treehouse fantasies returned after graduating from college in Colorado with an economics degree. The carpenter and home builder within him could not be silenced, and with an eye to becoming "the treehouse guy," Nelson embarked on a career path unique in this age. The 1994 publication of Treehouses: The Art and Craft of Living Out on a Limb, the first book of its kind, has culminated in the publication of five more books on the subject, a thriving treehouse building and supply company, a treehouse hotel, and a hit television series on Animal Planet. He lives with his wife, Judy, in Fall City, Washington, and has three children.

Gerry Hadden is an award-winning documentary filmmaker for CCTV America and travels extensively throughout Latin America. From 2000 to 2004 he was National Public Radio's Mexico, Central America, and Caribbean correspondent. In 2011 he published a memoir from those years entitled Never the Hope Itself: Love and Ghosts in Latin America and Haiti. It is about a young reporter trying to make sense of his own life and a region forgotten in the wake of the September 11, 2001, attacks. In 2004 Hadden moved to Barcelona with his partner. For ten years, until joining CCTV America in 2014, he was the Europe correspondent for Public Radio International's The World. He and his partner have three children.
Loading...
or support indie stores by buying on
(This book is on backorder)