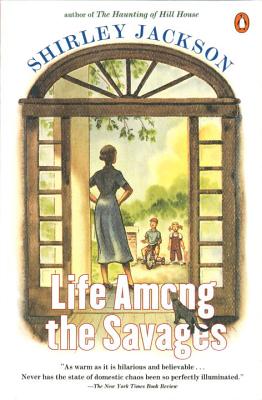 Life among the Savages

Shirley Jackson, author of the classic short story The Lottery, was known for her terse, haunting prose. But the writer possessed another side, one which is delightfully exposed in this hilariously charming memoir of her family's life in rural Vermont. Fans of Please Don't Eat the Daisies, Cheaper by the Dozen, and anything Erma Bombeck ever wrote will find much to recognize in Shirley Jackson's home and neighborhood: children who won't behave, cars that won't start, furnaces that break down, a pugnacious corner bully, household help that never stays, and a patient, capable husband who remains lovingly oblivious to the many thousands of things mothers and wives accomplish every single day.

"Our house," writes Jackson, "is old, noisy, and full. When we moved into it we had two children and about five thousand books; I expect that when we finally overflow and move out again we will have perhaps twenty children and easily half a million books." Jackson's literary talents are in evidence everywhere, as is her trenchant, unsentimental wit. Yet there is no mistaking the happiness and love in these pages, which are crowded with the raucous voices of an extraordinary family living a wonderfully ordinary life.

Continuously in print since 1948, Jackson's Haunting of Hill House has been bought by Dreamworks.