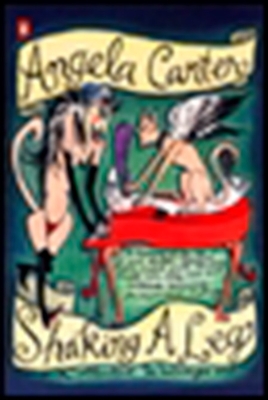 "An electrifying intellectual autobiography, with all the narrative expanse, drama, outrage, and high comedy of the author’s fiction. Angela Carter is revealed here, anew, as one of the most important thinkers of twentieth-century world literature—and one of its most pungent voices.”—Rick Moody

One of contemporary literature’s most original and affecting fiction writers, Angela Carter also wrote brilliant nonfiction. Shaking a Leg comprises the best of her essays and criticism, much of it collected for the first time. Carter’s acute observations are spiked with her piercing matter-of-factness, her devastating wit, her penchant for mockery, and her passion for the absurd. Whether discussing films or food, feminism or fantasy, science fiction or sex, Carter consistently explores new territories and overturns old ideas. No cultural icon escapes her scrutiny; as in her fiction, Carter offers glorious evidence of the transforming power of the imagination. From delightfully wicked commentaries on Gone with the Wind, a Japanese fertility festival, and fellow writers, including Lawrence, Lovecraft, Borges, and Burroughs, to enchanting personal essays, Carter shares her thoughts and herself with glee.

“What a wonderful collection—sharp, funny, too decent for sarcasm but great wit and humanity, an unusual combination. But it makes us miss her, miss laughing with her, that real, intelligent, tough writing woman.”—Grace Paley

Angela Carter (1940 -1992) wrote nine novels and numerous short stories, as well as nonfiction, radio plays, and the screenplay for Neil Jordan's 1984 movie The Company of Wolves, based on her story. She won numerous literary awards, traveled and taught widely in the United States, and lived in London.
Loading...
or support indie stores by buying on