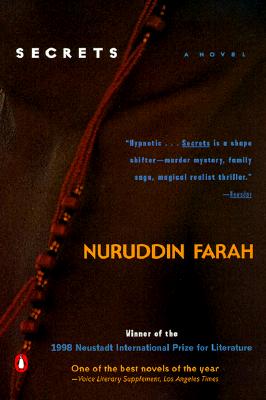 It is the week before the outbreak of the civil war in Somalia. Kalaman, a successful young businessman in Mogadiscio receives an unexpected house guest the wild and sexually adventurous Sholoongo, his childhood crush returned from America. She announces that she intends to have his baby. Confronted by this dangerous interruption from his past, Kalaman starts to investigate his family's history, and uncovers the startling key to his own conception. Hailed by Salman Rushdie as "one of the finest contemporary African novelists," Farah writes in a rhythmical, sensual prose reminiscent of Garcia Marquez's best fiction. Evoking the beauty and tragedy of Africa, Secrets is a remarkable portrait of a family disintegrating like its country, its ties dissolved by exposed lies and secrets.

Nurudin Farah is the author of nine novels, including From a Crooked Rib, Links and his Blood in the Sun trilogy: Maps, Gifts, and Secrets. His novels have been translated into seventeen languages and have won numerous awards. Farah was named the 1998 laureate of the Neustadt International Prize for Literature, "widely regarded as the most prestigious international literary award after the Nobel" (The New York Times). Born in Baidoa, Somalia, he now lives in Cape Town, South Africa, with his wife and their children.
Loading...
or
Not Currently Available for Direct Purchase