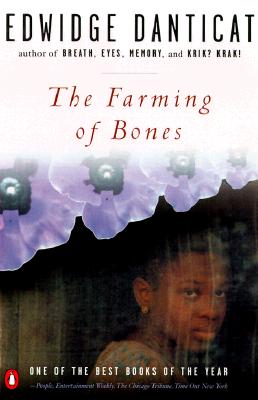 The Farming of Bones

The Farming of Bones begins in 1937 in a village on the Dominican side of the river that separates the country from Haiti. Amabelle Desir, Haitian-born and a faithful maidservant to the Dominican family that took her in when she was orphaned, and her lover Sebastien, an itinerant sugarcane cutter, decide they will marry and return to Haiti at the end of the cane season. However, hostilities toward Haitian laborers find a vitriolic spokesman in the ultra-nationalist Generalissimo Trujillo who calls for an ethnic cleansing of his Spanish-speaking country. As rumors of Haitian persecution become fact, as anxiety turns to terror, Amabelle and Sebastien's dreams are leveled to the most basic human desire: to endure.

Based on a little-known historical event, this extraordinarily moving novel memorializes the forgotten victims of nationalist madness and the deeply felt passion and grief of its survivors.

Edwidge Danticat was born in Port-au-Prince, Haiti, in 1969. Her parents emigrated to New York when she was a small child, while she and her brother remained in Haiti, where they were raised by an aunt and uncle. At the age of twelve she moved to Brooklyn to be with her parents. Danticat began writing as a teenager, and her essays and stories have appeared in many periodicals. She received a degree in French literature from Barnard College and an MFA in writing from Brown University. At Brown she completed work on Breath, Eyes, Memory, which she had begun as an undergraduate, and the novel was published in 1994. After finishing her master's degree, Danticat worked in Clinica Estetico, the production office of film director Jonathan Demme, who has a consuming interest in Haiti. She read and wrote scripts and continues to monitor and occasionally protest American policy in Haiti. In late 1994, Danticat returned to Haiti for the first time in thirteen years, to see President Aristide restored to power. Danticat is the recipient of a James Michener Fellowship and awards from Seventeen magazine and from Essence. She is also the author of a collection of Haitian stories, Krik? Krak!, which was a National Book Award finalist. She lives in New York City.
Loading...
or
Not Currently Available for Direct Purchase