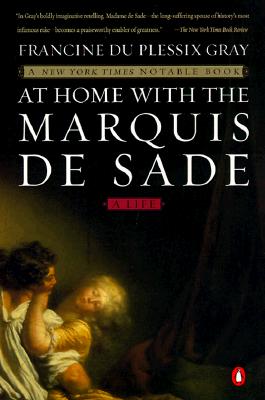 At Home with the Marquis de Sade

Much has been written about the Marquis de Sade (1740-1814), the flamboyant aristocrat whose years indulging in sexual aberrations inspired his celebrated works 120 Days of Sodom and Justine -- and landed him in the Bastille. However, scant attention has been paid to the two women who were closest to him: Renee Pelagie de Sade, his adoring wife, and his powerful mother-in-law, Madame de Montreuil.

Francine du Plessix Gray draws on thousands of pages of letters exchanged by the married couple, few of which have been published before in English, to explore in the fullest historical and psychological detail what it was like to be married to one of the most maverick spirits of modern history. Gray brings to life two remarkable women and their complex relationship to Sade as they dedicated themselves to protecting him from the law, curbing his excesses, and ultimately confining him. With immediacy, irony, and verve, At Home with the Marquis de Sade also conjures up the extravagant hedonism and terror of late eighteenth-century France.