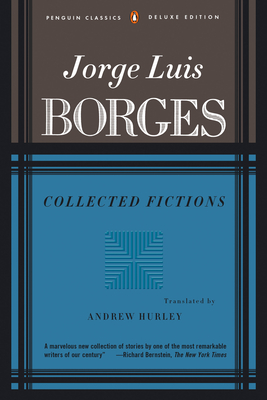 For the first time in English, all the fiction by the writer who has been called “the greatest Spanish-language writer of our century” collected in a single volume

From Jorge Luis Borges’s 1935 debut with The Universal History of Iniquity, through his immensely influential collections Ficciones and The Aleph, these enigmatic, elaborate, imaginative inventions display his talent for turning fiction on its head by playing with form and genre and toying with language. Together these incomparable works comprise the perfect one-volume compendium for all those who have long loved Borges, and a superb introduction to the master's work for those who have yet to discover this singular genius.

“A marvelous new collection of stories by one of the most remarkable writers of our century.” —The New York Times

“The major work of probably the most influential Latin American writer of the century.” —The Washington Post Book World

“An unparalleled treasury of marvels . . . Along with a tiny cohort of peers, and seers (Kafka and Joyce come to mind), Borges is more than a stunning storyteller and a brilliant stylist; he’s a mirror who reflects the spirit of his time.” —Chicago Tribune

“An event worth of celebration . . . Hurley deserves our enthusiastic praise for this monumental piece of work.” —San Francisco Chronicle

“Borges is the most important Spanish-language writer since Cervantes. . . . To have denied him the Nobel Prize is as bad as the case of Joyce, Proust, and Kafka.” —Mario Vargas Llosa

“When I read a good book, I sometimes like to think I might be capable of writing something similar, but never, in my wildest dreams, could I write anything that approaches the level of cleverness and intellect and madness of Borges. I don’t think anyone could.” —Daniel Radcliffe

Jorge Luis Borges was born in Buenos Aires in 1989 and was educated in Europe. One of the most widely acclaimed writers of our time, he published many collections of poems, essays, and short stories before his death in Geneva in June 1986. In 1961 Borges shared the International Publisher’s prize with Samuel Beckett. The Ingram Merrill Foundation granted him its Annual Literary Award in 1966 for his “outstanding contribution to literature.” In 1971 Columbia University awarded him the first of many degrees of Doctor of Letters, honoris causa (eventually the list included both Oxford and Cambridge), that he was to receive from the English-speaking world. In 1971 he also received the fifth biennial Jerusalem Prize and in 1973 was given one of Mexico’s most prestigious cultural awards, the Alfonso Reyes Prize. In 1980 he shared with Gerardo Diego the Cervantes Prize, the Spanish world’s highest literary accolade. Borges was Director of the Argentine National Library from 1955 until 1973.

Andrew Hurley (editor/translator) is a translator of numerous works of literature, criticism, history, and memoir. He is professor emeritus at the University of Puerto Rico.