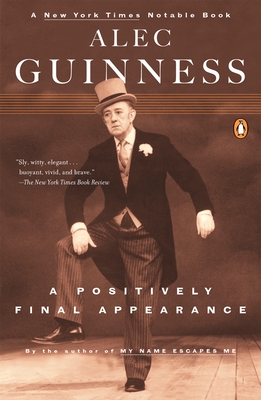 These journal entries are comprised of Sir Alec Guinness’s observations on Britain during the tumultuous times of Princess Diana’s death and the election of Tony Blair, and comments on his quintessentially English country life with his wife. Written from the summer of 1996 through 1998, A Positively Final Appearance is a follow-up to the best-selling My Name Escapes Me. Guinness offers frank (and surprising) reflections on the effects of appearing in the Star Wars films, and both hilarious and poignant memories of such well-known performers as Humphrey Bogart and Noel Coward. This delightful, humorous journal is a wonderful legacy from a beloved actor.

“Reading Guinness is like finally sitting down and soaking in the wisdom of the grandparent you never seem to have time for. And we may never see the likes of him again.”—Chicago Sun-Times

Sir Alec Guinness was born in London in 1914 and began his professional acting career in 1933. His many films include Oliver Twist, Kind Hearts and Coronets, The Bridge on the River Kwai (for which he won an Oscar), Lawrence of Arabia, Doctor Zhivago, and Star Wars. He was knighted in 1959 and made a Companion of Honour in 1994.
or
Not Currently Available for Direct Purchase
Copyright © 2020 American Booksellers Association