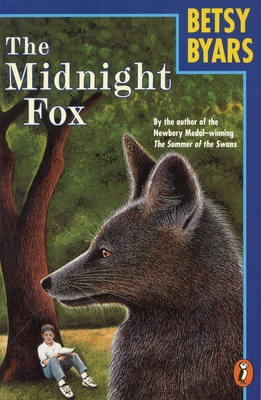 Tom hates having to spend the summer on a farm . . . until he discovers the midnight fox.

No one asked Tom how he felt about spending two months on his Aunt Millie’s farm. For a city boy, the farm holds countless terrors—stampeding baby lambs, boy-chasing chickens, and worst of all, loneliness. But everything changes when Tom sees the midnight fox. He can spend hours watching the graceful black fox in the woods. And when her life—and that of her cub—is in danger, Tom knows exactly what he must do.

A Library of Congress Children’s Book of the Year

Betsy Byars has written over sixty books for young people. Her first book was published in 1962 and since then she has published regularly. Her books have been translated into nineteen languages and she gets thousands of letters from readers in the United States and from all over the world.

She has won many awards. Among them are the Newbery Medal in 1971 for her novel The Summer of the Swans, the American Book Award in 1981 for The Night Swimmers, The Edgar (for the best mystery for young people) in 1992 for Wanted..Mud Blossom and the Regina Medal by the Catholic Library Association for the body of her work. She especially values her many state awards which were voted on by the readers of the state.

Betsy attended public schools in North Carolina and graduated from Queens College in Charlotte, NC with a major in English. She began her writing career five years after her graduation by publishing short magazine articles. As she began to read to her children, her interest in writing for young people began.
Betsy lives with her husband Ed on an air strip in South Carolina. They are both pilots, and the bottom floor of their house is a hangar so they can taxi out and take off, almost from their front yard. The top floor of the house? Betsy's studio!


Praise For The Midnight Fox…

"This book holds one of my favorite characters, city bred Tom, who is doomed to spend the summer on his uncle's farm when his parents decide to take a long bicycle trip. Tom doesn't like animals, and they don't like him. But through quiet afternoons spent exploring the forest and fields, Tom becomes more aware of, and finally more comfortable, with the power and beauty of the natural world, and in the end acts to save a part of that world."--Children's Literature
or
Buy Here
Copyright © 2020 American Booksellers Association