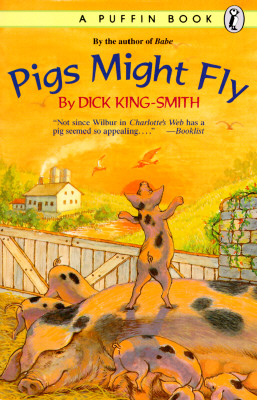 An ALA Booklist “Best of the Decade” and an ALA Notable Book, from the author of Babe: The Gallant Pig.

Daggie may be the runt of the litter, but he’s destined for greatness.

Daggie Dogfoot, the runt of Mrs. Barleylove’s litter, is in danger. Not even Mrs. Barleylove knows what the Pigman does with runts when he takes them away from the pen. But Daggie is a pig of remarkable qualities, and he’s not about to let the Pigman get him. Instead, Daggie runs away and decides to learn how to fly. But when he tries leaping off a cliff, he discovers another talent—a talent he’ll need to save the entire farm . . .

Dick King-Smith was a soldier, a farmer, a family man, a primary school teacher and most memorably to his millions of fans, a best-selling children’s author. He wrote around 130 books, which have been translated into many languages and have sold over 15 million copies worldwide.
Loading...
or support indie stores by buying on