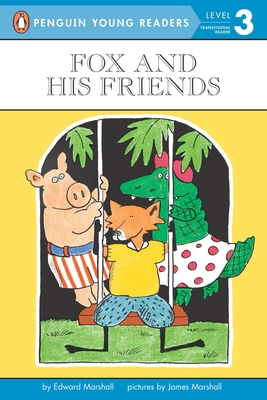 In three separate episodes Fox wants to play with his friends, but duty, in one form or another, always interferes.

James Marshall was born in San Antonio, Texas, and grew up sixteen miles outside of the town on the family farm. On a fateful summer afternoon in 1971 James Marshall lay on his hammock drawing pictures. His mother was inside the house watching Who's Afraid of Virginia Wolf on TV. The strident voices of the movie's protagonists, George and Martha, split the quiet air, and as the sketches began to take shape, history was made... and James Marshall became one of the most prolific and successful author/illustrators of children's books.

He is best known for his series on the mischievous exploits of Fox, a debonair, lazy showoff; the uproarious adventures of the two Cut-Ups, Spud and Joe; George and Martha; and the misadventures of the Stupid family. The Washington Post said in a review of his work, "There are few better writers and illustrators for children now than Marshall. Certainly there is no one else working today who more successfully captures the child's point of view than does the creator of George and Martha and the Stupids." The New York Times said about the Fox books: "The miracle of Mr. Marshall's work is that so often his stories are as profound as they are simple." He illustrated new versions of many children's classics, including Goldilocks and the Three Bears, for which he received a Caldecott Honor, Red Riding Hood, The Three Little Pigs, and Hansel and Gretel.
Loading...
or support indie stores by buying on