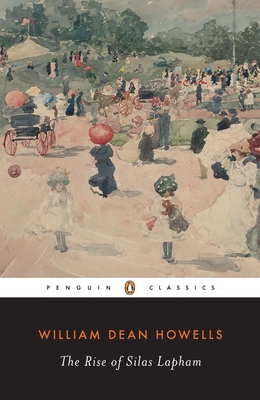 The Rise of Silas Lapham

William Dean Howells' richly humorous characterization of a self-made millionaire in Boston society provides a paradigm of American culture in the Gilded Age. After establishing a fortune in the paint business, Silas Lapham moves his family from their Vermont farm to the city of Boston, where they awkwardly attempt to break into Brahmin society. Silas, greedy for wealth as well as prestige, brings his company to the brink of bankruptcy, and the family is forced to return to Vermont, financially ruined but morally renewed. As Kermit Vanderbilt points out in his introduction, the novel focuses on important themes in the American literary tradition: the efficacy of self-help and determination, the ambiguous benefits of social and economic progress, and the continual contradiction between urban and pastoral values.

William Dean Howells (1837-1920) was born in Martins Ferry, Ohio. His father was a printer and newspaperman, and the family moved from town to town. Howells went to school where he could. As a boy he began learning the printer’s skill. By the time he was in his teens he was setting type for his own verse. Between 1856 and 1861 he worked as a reporter for the Ohio State Journal. About this time his poems began to appear in the Atlantic Monthly. His campaign biography of Abraham Lincoln, compiled in 1860, prompted the administration to offer him the consulship at Venice, a post he held from 1861 to 1865. He married Elinor Gertrude Meade, a young woman from Vermont, in 1862 Paris. On his return to the United States in 1865, Howells worked in New York before going to Boston as assistant to James T. Fields of The Atlantic Monthly. In 1871 he became editor-in-chief of the magazine. In this position he worked with many young writers, among them Mark Twain and Henry James, both of whom became his close friends. His first novel, Their Wedding Journey, appeared in 1872. The Rise of Silas Lapham was serialized in Century Magazine before it was published in book form in 1885. A Hazard of New Fortunes was published five years later. His position as critic, writer, and enthusiastic exponent of the new realism earned William Dean Howells the respected title of Dean of American Letters.
Loading...
or
Not Currently Available for Direct Purchase