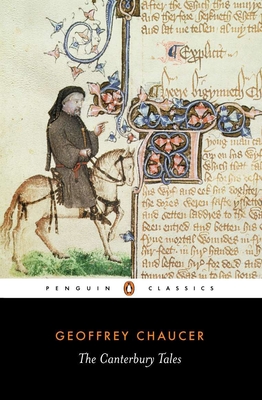 One of the greatest and most ambitious works in English literature, in the original Middle English

The Canterbury Tales depicts a storytelling competition between pilgrims drawn from all ranks of society. The tales are as various as the pilgrims themselves, encompassing comedy, pathos, tragedy, and cynicism. The Miller and the Reeve express their mutual antagonism in a pair of comic stories combining sex and trickery; in “The Shipman’s Tale,” a wife sells her favors to a monk. Others draw on courtly romance and fantasy: the Knight tells of rivals competing for the love of the same woman, and the Squire describes a princess who can speak to birds. In these twenty-four tales, Chaucer displays a dazzling range of literary styles and conjures up a wonderfully vivid picture of medieval life.

This is a freshly established Middle English text with standardized spelling and punctuation and on-page glossing. It Features an introduction by Jill Mann, a chronology of Chaucer's life and works, detailed explanatory notes, suggestions for further reading, a full glossary, and a bibliography.

Geoffrey Chaucer was born in London, the son of a wine-merchant, in about 1342, and as he spent his life in royal government service his career happens to be unusually well documented. By 1357 Chaucer was a page to the wife of Prince Lionel, second son of Edward III, and it was while in the prince's service that Chaucer was ransomed when captured during the English campaign in France in 1359-60. Chaucer's wife Philippa, whom he married c. 1365, was the sister of Katherine Swynford, the mistress (c. 1370) and third wife (1396) of John of Gaunt, Duke of Lancaster, whose first wife Blanche (d. 1368) is commemorated in Chaucer's ealrist major poem, The Book of the Duchess.From 1374 Chaucer worked as controller of customs on wool in the port of London, but between 1366 and 1378 he made a number of trips abroad on official business, including two trips to Italy in 1372-3 and 1378. The influence of Chaucer's encounter with Italian literature is felt in the poems he wrote in the late 1370's and early 1380s – The House of Fame, The Parliament of Fowls and a version of The Knight's Tale – and finds its fullest expression in Troilus and Criseyde.

Jill Mann is a fellow of the British Academy, an Honorary Fellow of St. Anne’s College, Oxford, and a Life Fellow of Girton College, Cambridge.
Loading...
or support indie stores by buying on