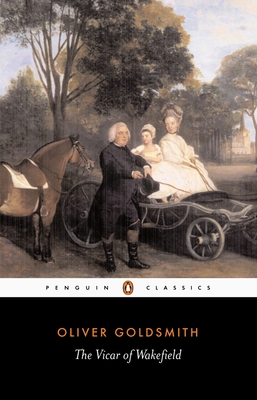 The Vicar of Wakefield

"The greatest object in the universe, says a certain philosopher, is a good man struggling with adversity."

When Dr Primrose loses his fortune in a disastrous investment, his idyllic life in the country is shattered and he is forced to move with his wife and six children to an impoverished living on the estate of Squire Thornhill. Taking to the road in pursuit of his daughter, who has been seduced by the rakish Squire, the beleaguered Primrose becomes embroiled in a series of misadventures–encountering his long-lost son in a travelling theatre company and even spending time in a debtor’s prison. Yet Primrose, though hampered by his unworldliness and pride, is sustained by his unwavering religious faith. In The Vicar of Wakefield, Goldsmith gently mocks many of the literary conventions of his day–from pastoral and romance to the picaresque – infusing his story of a hapless clergyman with warm humour and amiable social satire.

Oliver Goldsmith (1728 - 1774) was born in Ireland. Having studied at Trinity College, Dublin, he studied medicine at Edinburgh and Leyden after being rejected by the Church of Ireland. Settling in London, he was writing professionally by 1757 and became a friend of Johnson. Best known for She Stoops to Conquer, The Vicar of Wakefield is his only novel and is generally considered his finest work.

Stephen Coote was educated at Magdalene College, Cambridge and Birkbeck College, University of London. He is the author of critical studies of Chaucer, T.S. Eliot and English literature of the Middle Ages, as well as biographies of Byron and William Morris.
Loading...
or support indie stores by buying on
(This book is on backorder)