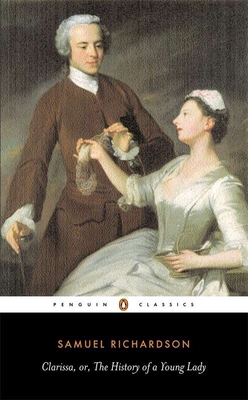 Or the History of a Young Lady

"Oh thou savage-hearted monster! What work hast thou made in one guilty hour, for a whole age of repentance!"

Pressured by her unscrupulous family to marry a wealthy man she detests, the young Clarissa Harlowe is tricked into fleeing with the witty and debonair Robert Lovelace and places herself under his protection. Lovelace, however, proves himself to be an untrustworthy rake whose vague promises of marriage are accompanied by unwelcome and increasingly brutal sexual advances. And yet, Clarissa finds his charm alluring, her scrupulous sense of virtue tinged with unconfessed desire. Told through a complex series of interweaving letters, Clarissa is a richly ambiguous study of a fatally attracted couple and a work of astonishing power and immediacy. A huge success when it first appeared in 1747, and translated into French and German, it remains one of the greatest of all European novels.

In his introduction, Angus Ross examines characterization, the epistolary style, the role of the family and the position of women in Clarissa. This edition also includes a chronology, suggestions for further reading, tables of letters, notes, a glossary and an appendix on the music for the "Ode to Wisdom."

Praise For Clarissa: Or the History of a Young Lady…

“Harrowing, unforgiving and extreme . . . A graphic study of the pathologies endemic to a culture that treats women as property. It’s also a passionate celebration of female friendship and of the written word—storytelling as means of power and transcendence.” —Jennifer Egan, Lit Hub

Samuel Richardson (1689-1761) was born in Derbyshire, the son of a joiner. He received little formal education and in 1706 was apprenticed to a printer in London. Thirteen years later he set himself up as a stationer and printer and became of the leading figures in the trade. He printed political material, newspapers and literature. He began writing Pamela as a result of a suggestion from friends that he should compile a book of model letters for use by unskilled writers. Pamela was a great success and went on to write Clarissa, one of the masterpieces of European literature.

Angus Ross is Emeritus Professor of English at the University of Sussex. He writes on eighteenth-century and other literature and has edited Swift as well as a number of anthologies.
Loading...
or support indie stores by buying on