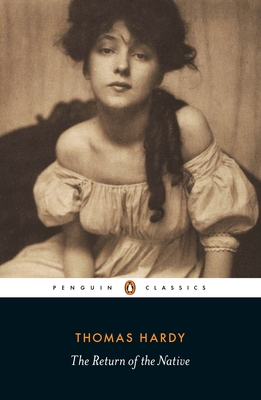 The Return of the Native

‘You are ambitious, Eustacia–no not exactly ambitious, luxurious. I ought to be of the same vein, to make you happy, I suppose’

Tempestuous Eustacia Vye passes her days dreaming of passionate love and the escape it may bring from the small community of Egdon Heath.  Hearing that Clym Yeobright is to return from Paris, she sets her heart on marrying him, believing that through him she can leave rural life and find fulfilment elsewhere. But she is to be disappointed, for Clym has dreams of his own, and they have little in common with Eustacia’s. Their unhappy marriage causes havoc in the lives of those close to them, in particular Damon Wildeve, Eustacia’s former lover, Clym’s mother and his cousin Thomasin. The Return of the Native illustrates the tragic potential of romantic illusion and how its protagonists fail to recognize their opportunities to control their own destinies.

Penny Boumelha’s introduction examines the classical and mythological references and the interplay of class and sexuality in the novel. This edition, essentially Hardy’s original book version of the novel, also includes notes, a glossary, chronology and bibliography.

Praise For The Return of the Native…

"This is the quality Hardy shares with the great writers...this setting behind the small action the terrific action of unfathomed nature."
--D. H. Lawrence

Thomas Hardy (1840-1928) wrote novels and poetry, much of which is set in the semi-imaginary county of Wessex. His novels include Far From the Madding Crowd (1874), The Return of the Native (1878), The Mayor of Casterbridge(1886), Tess of the D'Urbervilles(1891) and Jude the Obscure (1895). He published his first volume of poetry, Wessex Poems, in 1898 and continued to publish collections of poems until his death.

Patricia Ingham is Senior Research Fellow and Reader at St Anne's College, Oxford. She has written on the Victorian novel and on Hardy in particular. She is the General Editor of all of Hardy's fiction in the Penguin Classics and has edited Gaskell's North and South for the series.
Loading...
or
Not Currently Available for Direct Purchase