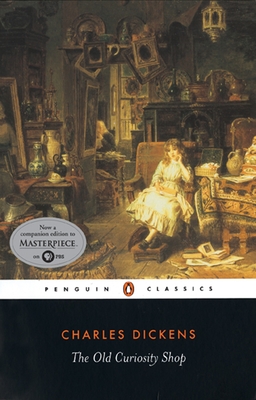 The story of Little Nell and her "tragedy of sorrows," told in a blend of realism and fairy-tale

The sensational bestselling story of Little Nell, the beautiful child thrown into a shadowy, terrifying world, seems to belong less to the history of the Victorian novel than to folklore, fairy tale, or myth. The sorrows of Nell and her grandfather are offset by Dickens's creation of a dazzling contemporary world inhabited by some of his most brilliantly drawn characters-the eloquent ne'er-do-well Dick Swiveller; the hungry maid known as the "Marchioness"; the mannish lawyer Sally Brass; Quilp's brow-beaten mother-in-law; and Quilp himself, the lustful, vengeful dwarf, whose demonic energy makes a vivid counterpoint to Nell's purity.

Charles Dickens was born on February 7, 1812, in Landport, Portsea, England. He died in Kent on June 9, 1870. The second of eight children of a family continually plagued by debt, the young Dickens came to know not only hunger and privation,but also the horror of the infamous debtors’ prison and the evils of child labor. A turn of fortune in the shape of a legacy brought release from the nightmare of prison and “slave” factories and afforded Dickens the opportunity of two years’ formal schooling at Wellington House Academy. He worked as an attorney’s clerk and newspaper reporter until his Sketches by Boz (1836) and The Pickwick Papers (1837) brought him the amazing and instant success that was to be his for the remainder of his life. In later years, the pressure of serial writing, editorial duties, lectures, and social commitments led to his separation from Catherine Hogarth after twenty-three years of marriage. It also hastened his death at the age of fifty-eight, when he was characteristically engaged in a multitude of work.
or support indie stores by buying on