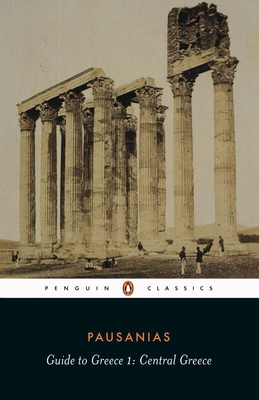 The first volume of the time-honored travel book about Greece, written 2,000 years ago

Written in the second century AD by a Greek traveller for a predominantly Roman audience, Pausanias' Guide to Greece is an extraordinarily literate and well-informed guidebook. A study of buildings, traditions and myth, it describes with precision and eloquence the glory of classical Greece shortly before its ultimate decline in the third century. This volume, the first of two, concerns the five provinces of central Greece, with an account of cities including Athens, Corinth and Thebes and a compelling depiction of the Oracle at Delphi. Along the way, Pausanias recounts Greek legends that are unknown from any other source and quotes a wealth of classical literature and poetry that would otherwise have been lost. An inspiration to Byron and Shelley, Guide to Greece remains one of the most influential travel books ever written.

Pausanias was a Greek geographer and native of Lydia who explored Greece, Macedonia, Asia and Africa, before settling in Rome. Pausanias is believed to have lived in the second half of the second century A.D. and is thought by some historians to have been a doctor as well as a scholar.

Peter Levi was a Jesuit priest and archaelogical correspondent for The Times before his appointment as Professor of Poetry at Oxford. In addition to his translation of Pausanias he also published biographies of Tennyson, Edward Lear, Virgil, Horace and John Milton, and 22 volumes of poetry.
Loading...
or
Not Currently Available for Direct Purchase