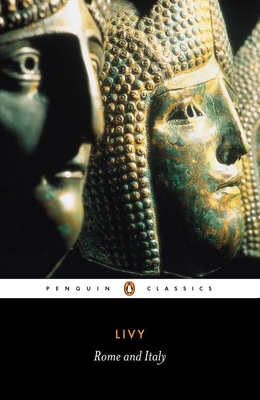 Books VI-X of The History of Rome from Its Foundation

Books VI-X of Livy's monumental work trace Rome's fortunes from its near collapse after defeat by the Gauls in 386 BC to its emergence, in a matter of decades, as the premier power in Italy, having conquered the city-state of Samnium in 293 BC. In this fascinating history, events are described not simply in terms of partisan politics, but through colourful portraits that bring the strengths, weaknesses and motives of leading figures such as the noble statesman Camillus and the corrupt Manlius vividly to life. While Rome's greatest chronicler intended his history to be a memorial to former glory, he also had more didactic aims—hoping that readers of his account could learn from the past ills and virtues of the city.

Titus Livius (59 BC-AD 17) began working on his History of Rome at the age of 30 and continued for over 40 years until his death. The history ran to 142 books, of which 35 survive.

Betty Radice (1912-1985) read classics at Oxford, then married and, in the intervals of bringing up a family, tutored in classics, philosophy and English. She became joint editor of the Penguin Classics in 1964. As well as editing the translation of Livy’s The War with Hannibal she translated Livy’s Rome and Italy, Pliny’s Letters, The Letters of Abelard and Heloise and Erasmus’s Praise of Folly, and also wrote the introduction to Horace’s Complete Odes and Epodes, all for the Penguin Classics. She also edited Edward Gibbon’s Memoirs of My Life for the Penguin English Library, and edited and annotated her translation of the younger Pliny’s works for the Loeb Library of Classics and translated from Renaissance Latin, Greek and Italian for the Officina Bodoni of Verona. She collaborated as a translator in the Collected Works of Erasmus, and was the author of the Penguin Reference Book Who’s Who in the Ancient World. Radice was an honorary fellow of St Hilda’s College, Oxford, and a vice-president of the Classical Association.
Loading...
or
Not Currently Available for Direct Purchase