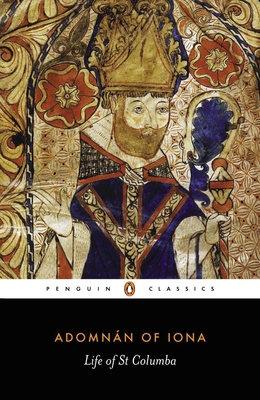 The Life of Saint Columba

Although related to one of the ruling families of Ireland, Columba (c 521-97) became a central figure in the 'Age of Saints' by setting out from his native land and founding his famous monastery on the island of Iona.

It was from here that priests and monks played a key role in converting the Picts of Scotland, here that countless penitents came on pilgrimages and that the King of Dalriada (Argyll) came to be consecrated. Adomnán's Life, writes Richard Sharpe, is the fullest early account, offering a 'vivid depiction of the abbot among his own monks, written on the spot by the saint's successor one hundred years after Columba's death'.

Drawing on extensive written and oral traditions, Adomnán presents Columba as a man distinguished for his prophetic and miraculous powers, whose life was filled with angelic apparitions and whose dying days were spent preparing for his departure. A stimulating Introduction sketches in the background, the archaeological evidence from Iona and the legends that grew up around Columba in medieval and more recent times. The result is an ideal new edition, equally suitable for readers seeking spiritual insight or the hard core of historical fact.

St Adomnan of Iona was born in Ireland c.628, a descendant of St Columba's grandfather. In 679 he became the ninth abbot of Iona. He played an important role in persuading the northern Irish churches to adopt the Catholic date for Easter, but his most famous work is his Life of St Columba. He died on Iona in 704.
or
Not Currently Available for Direct Purchase