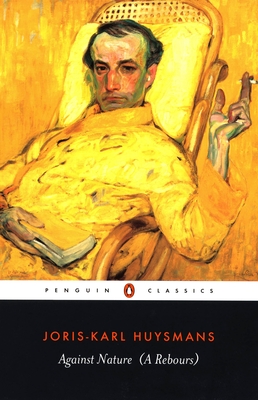 Against Nature (A Rebours)

is translated by Robert Baldick with an introduction by Patrick McGuinness in Penguin Classics. A wildly original fin-de-siècle novel, Against Nature contains only one character. Des Esseintes is a decadent, ailing aristocrat who retreats to an isolated villa where her indulges his taste for luxury and excess. Veering between nervous excitability and debilitating ennui, he gluts his aesthetic appetites with classical literature and art, exotic jewels (with which he fatally encrusts the shell of his tortoise), rich perfumes and a kaleidoscope of sensual experiences. Against Nature, in the words of the author, exploded 'like a meteorite' and has enjoyed a cult following to this day.

Born in Paris in 1848 and acknowledged as a principal architect of the fin-de-siècle imagination, Joris-Karl Huysmans was a career civil servant who wrote ten novels, most notably A Rebours (1884) and Là-Bas (1891). Huysmans died in 1907.

Robert Baldick (d.1972) translated widely from the French and wrote a biography of Huysmans.

Patrick McGuinness is a Fellow and Tutor in French at St Anne's College, Oxford, and editor of Symbolism, Decadence and the Fin de Siecle (Exeter UP, 2000).
Loading...
or support indie stores by buying on
(This book is on backorder)