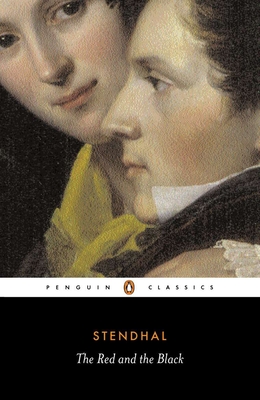 The Red and the Black

Charts the rise and fall of an ambitious young social climber in a cruel, monarchical society

Handsome, ambitious Julien Sorel is determined to rise above his humble provincial origins. Soon realizing that success can only be achieved by adopting the subtle code of hypocrisy by which society operates, he begins to achieve advancement through deceit and self-interest. His triumphant career takes him into the heart of glamorous Parisian society, along the way conquering the gentle, married Madame de Rênal, and the haughty Mathilde. But then Julien commits an unexpected, devastating crime—and brings about his own downfall. The Red and the Black is a lively, satirical portrayal of French society after Waterloo, riddled with corruption, greed and ennui, and Julien—the cold exploiter whose Machiavellian campaign is undercut by his own emotions—is one of the most intriguing characters in European literature.

Roger Gard's fine translation remains faithful to the natural, conversational tone of the original, while his introduction elucidates the complexities of Julien's character. This edition also contains a chronology, further reading and an appendix on Stendhal's use of epigraphs.

Praise For The Red and the Black…

“Raffel’s Père Goriot is both faithful and beautiful, and that makes it a masterpiece.” —Alain Renoir

“I predict that this translation will give Balzac’s great novel a new life for English and American readers. . . . The definitive translation for this generation.” —Peter Brooks

“[Raffel’s] translation has the vigor and elasticity of Balzac’s style, and catches with uncanny accuracy the tone of the period.” —Guy Davenport

“[Raffel’s Don Quijote] recasts the original into lively English, without losing the complexity and flavor of the Spanish. . . . This Quijote flows smoothly and reads, in fact, like original prose rather than a translation.” —Adrienne Martin

Henri Marie Beyle, known through his writing as Stendhal, was born in Grenoble in 1783 and educated there at the École Centrale. A cousin offered him a post in the Ministry of War, and from 1800 he followed Napoleon’s campaigns in Italy, Germany, Russia and Austria. In between wars, he spent his time in Paris drawing rooms and theatres.

After the fall of Napoleon, he retired to Italy, adopted his pseudonym and started to write books on Italian painting, Haydn and Mozart, and travels in Italy. In 1821 the Austrian police expelled him from the country, and on returning to Paris he finished his book De l’amour. This was followed by Racine et Shakespeare, a defense of Romantic literature. Le Rouge et le noir was his second novel, and he also produced or began three others, including La Chartreuse de Parme and Lucien Leuwen. None of his published works was received with any great understanding during his lifetime.

Beyle was appointed Consul at Civitavecchia after the 1830 revolution, but his health deteriorated and six years later he was back in Paris and beginning a Life of Napoleon. In 1841 he was once again recalled for reasons of illness, and in the following year suffered a fatal stroke. Various autobiographical works, Journal, Souvenirs de l’egotisme and La Vie de Henri Brulard, were published later, as his fame grew.

Roger Gard was educated at Abbotsholme School, Derbyshire, and at Corpus Christi College, Cambridge. Before his death in 2000 he was Emeritus Reader in English at Queen Mary and Westfield College, University of London. Among his publications are books on Henry James, Jane Austen and the teaching of fiction in schools. He also translated Alfred de Vigny’s The Servitude and Grandeur of Arms, and edited Henry James’s A Landscape Painter and Other Tales, The Jolly Corner and Other Tales and a selection of his literary criticism, The Critical Muse, for Penguin Classics.