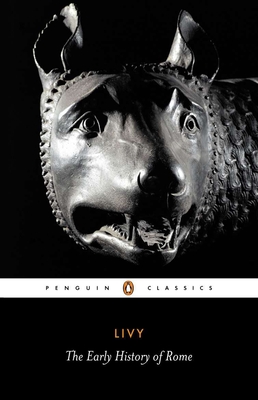 The Early History of Rome

Books I-V of The History of Rome from Its Foundation

With stylistic brilliance and historical imagination, the first five books of Livy's monumental history of Rome record events from the foundation of Rome through the history of the seven kings, the establishment of the Republic and its internal struggles, up to Rome's recovery after the fierce Gallic invasion of the fourth century B.C. Livy vividly depicts the great characters, legends, and tales, including the story of Romulus and Remus. Reprinting Robert Ogilvie's lucid 1971 introduction, this highly regarded edition now boasts a new preface, examining the text in light of recent Livy scholarship, informative maps, bibliography, and an index.

Aubrey de Sélincourt (1896-1962) was educated at Rugby and University College, Oxford. A scholar and translator, he translated Livy’s The Early History of Rome (Books I—V) and The War with Hannibal (Books XXI—XXX), The Histories of Herodotus and The Campaigns of Alexander by Arrian, all for the Penguin Classics. A schoolmaster of genius for twenty-six years, he retired in 1947 to the Isle of Wight, where he lived until his death.
Loading...
or support indie stores by buying on