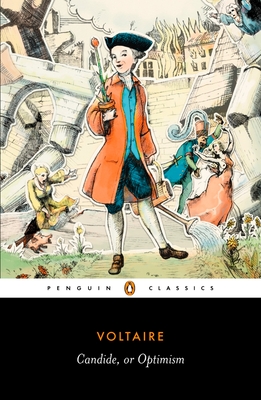 Theo Cuffe's marvelous translation of Voltaire's satirical masterpiece
With its vibrant new translation and perceptive introduction this new edition of Voltaire’s masterpiece belongs in the hands of every reader pondering our assumptions about human behavior and our place in the world. Candide tells of the hilarious adventures of the naïve Candide, who doggedly believes that “all is for the best” even when faced with injustice, suffering, and despair. Controversial and entertaining, Candide is a book that is vitally relevant today in our world pervaded by—as Candide would say—“the mania for insisting that all is well when all is by no means well.”

Voltaire (1694-1778) French writer, satirist, the embodiment of the 18th-century Enlightenment. Among his best-known works is the satirical short story CANDIDE (1759).

Michael Wood (introducer) is currently Straut Professor of English at Princeton. His books include Stendhal, America in the Movies, The Magician's Doubts, Franz Kafka, and The Road to Delphi.

Theo Cuffe (translator) has also translated a selection of Voltaire's short stories for Penguin, Micromégas and Other Short Fictions.

Praise For Candide: Or Optimism…

"Classic reads in stunning covers—your book club will be dying."
—Redbook
or
Buy Here
(This book is on backorder)
Copyright © 2020 American Booksellers Association